Cézanne's Portraits of Madame Cézanne at the Met

Cézanne often painted the same subject over and over, including his wife, Hortense Fiquet. Given the large number of works Cézanne made of her, it's surprising that the Metropolitan Museum of Art's exhibition Madame Cézanne (until March 15th) is the first time that there has been an exhibition devoted to them. The show brings together 24 of the 29 portraits, made over a 20-year period, plus many drawings and watercolor studies.

Accompanying Madame Cézanne is a jewel of a side exhibition of other Cézanne drawings and watercolors from the Met's collection (including the self-portrait above). 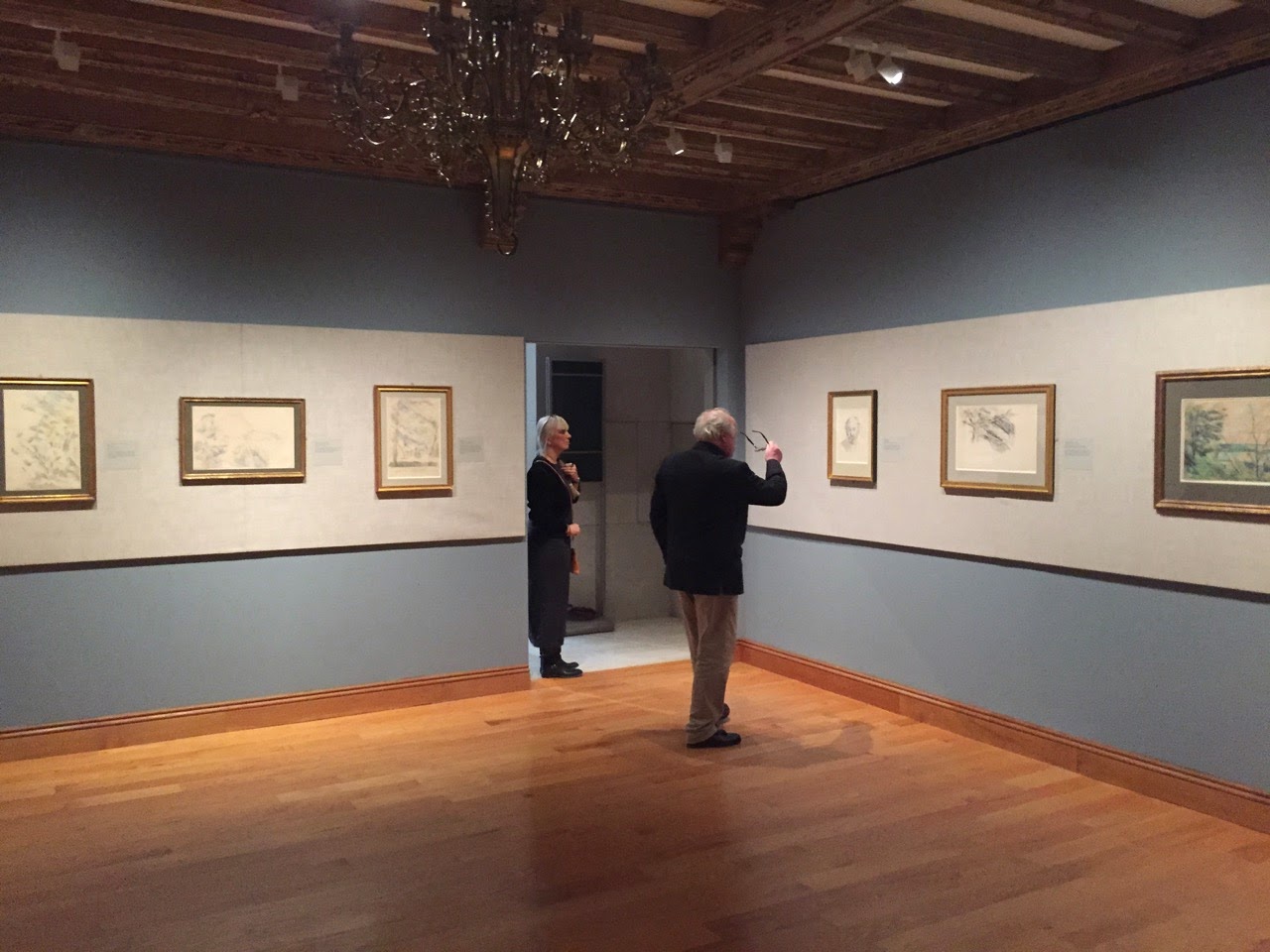 The personality of the long-suffering Hortense seems to be the main topic of discussion in reviews (here and here for example) and in the exhibition catalog: "Her expression in the painted portraits has been variously described as remote, inscrutable, dismissive, and even surly." She may in fact have been all these things, but I don't think capturing her personality, or the personality of any other of his sitters for that matter, was Cézanne's concern, any more than capturing the personality of an apple or a landscape was.
Everyone Cézanne painted, including himself, looks dour, probably because of the demands Cézanne placed on them. They were required to sit unmoving for many hours. He's quoted as complaining to Ambroise Vollard, his art dealer who he was painting: "You wretch! You've spoiled the pose. Do I have to tell you again you must sit like an apple? Does an apple move?"

Furthermore, I disagree with the common description of Cézanne's art as composed of massive, rounded, solid forms. I know about his famous advice for his friend the writer Émile Bernhard: “... deal with nature by means of the cylinder, the sphere and the cone … .” This is an oft repeated quote, and one of the few that's nonsense – or perhaps it was "do what I say, not what I do" type of advice. In any case, I defy anyone to find cylinders, spheres or cones in Cézanne's art.

Instead of massive, rounded and solid, I perceive Cézanne's work as elusive, evanescent, and unstable. (I discussed this in an earlier post.) Cézanne's compositions are always a little off – slightly (and sometimes not so slightly) out of balance. They can be asymmetrical, elongated, broken up, tipsy, uncentered; and forms fluctuate back and forth between inhabiting three-dimensional space and lying flat on the surface. This is what gives Cézanne's art energy and dynamism, and its expressive, if often disconcerting, power. The mind seeks harmony and balance, and when it's not there, there's tension. (These tensions were described by Erle Loran as early as the 1940’s; I don't know why they now seem to be disregarded.)

One of the most unstable portraits in the show is this one:
Madame Cézanne looks like she's ready to fall over, not so much because she's tilted precariously (although she's actually fairly vertical), but because she's not tied into the space compositionally. Instead she floats in a shifting, ambiguous space. The drapery and orange rectangular shape on the left form a frame pushing everything back, but her dress goes to the bottom edge, thrusting her bottom half forward. The wall behind her tilts in different directions, and she seems to be floating on her chair. Even her body doesn't stay still. Her left arm is lower than her right, and the two form a shifting play of curves with her torso. Her head and hair are also asymmetrical and jiggle around in space.

And Cézanne's forms aren't solid; I see them as colored light so gaseous it feels as though I could put my finger through them. (See close-up below.)
There is also tension in Cézanne's color which is ephemeral and seems to glow. This is because Cézanne typically employs simultaneous effects (also called simultaneous contrasts) – the phenomenon whereby colors, especially contrasting, or nearly contrasting, colors, appear to change depending on the colors they are near. This can be seen even in reproduction, as in the detail above. The blue shadows and highlights of Madame Cézanne's hands look blue/green because of the surrounding reds and oranges. And not only does the blue look greenish, but it's a glowing, brighter, more elusive color than can come out of a tube. The same is true of the yellow/orange. It glows because it's adjacent to blue, its near complement.

Simultaneous effects are especially strong under natural light, so it’s fortunate the Met installed this show in the Lehman wing. 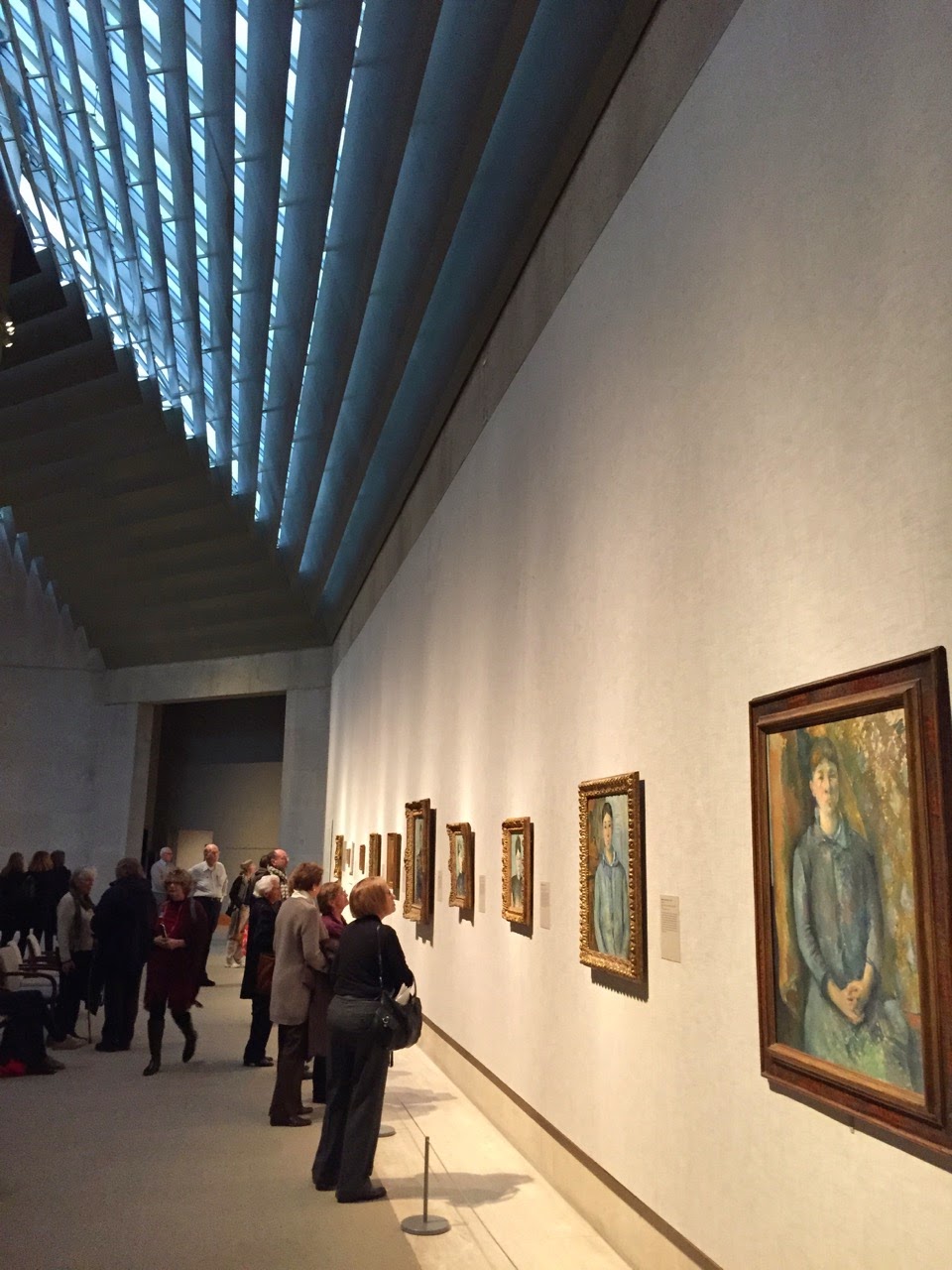 I think Cézanne's more subtle asymmetries are more successful because they kind of creep up on you. What appears on first sight to be a solid, tight composition starts to become animated, wobble, and shift in and out of space. This little beauty is a good example – a small, stark, unusually simple and abstract portrait, but nevertheless elusive, glowing and subtly but ultimately disconcertingly unstable.

The basic pose is pyramidal, which ordinarily is very stable except she's off-center, so that throws everything out of kilter. She's sitting on a stuffed chair that looks "massive, rounded and solid," but the right side dissolves into flat brushstrokes when it touches the unpainted edge on the right. The same goes for the stripes of her dress – they attach themselves to the unpainted strip on the bottom and are forced forward, flat onto the picture plane.

As you keep looking you'll find even more. The part in her hair is a little off-vertical, and her hair is bigger on the right than the left, and slightly higher. Her face sometimes looks turned a bit clockwise and other times looks frontal, and her right eye is slightly lower than her left. Also note that the red/green simultaneous effects on her face make her face glow and dissolve its solidity, weight and palpability. All these things animate and enliven the composition.

Here are some other works from the show.

Posted by Charles Kessler at 6:39 PM

This is a wonderful piece - I wish I had written it! Great example of how to convey what it means to look closely.

Thank you. Nice thing to say.

It is great to study these works more intimately and i thoroughly agree with what you have to say, although I wish I had said it first! The exhibition sounds marvelous in the true sense of the word, how I wish I could just fly to New York to see them.

Thank you for this insightful blogpost.I have often thought that his work was seismic.Noticed the split down the middle in a small still life in a show in Montreal,with more fruit on one side of the gap and fewer on the other.It was as though he wants you to group them as a whole but makes you jump across a chasm to do so.Enigmatic to say the least.I probably would not have noticed these things ten years ago.