First what I sadly did not see:
Hudson, the much loved and respected director of Feature Inc., died suddenly on February 10th. You can read about his many accomplishments in this obituary, but what was most remarkable about him is he never hid in a back office. His desk was always in front where he would greet people warmly. I often had interesting discussions with him about the work on exhibit or some other art topic. I'll really miss him; he was a real mensch.
Roberta Smith gave Katherine Bernhardt's show at Canada Gallery a rave review calling it "exuberant" and done with "panache." I agree. I've loved Bernhardt's work for a long time and wrote about it several years ago, so it's nice to see she's getting the attention she's long deserved. Phil Grauer, one of Canada's directors, wondered if recognition would have taken so long if she was "one of the boys." Good question. Phil also said David Zwirner bought a painting – I sure hope she doesn't end up at Zwirner's mega-gallery and become one of the boys.

I didn't go to any art fairs this season – I hate them. I think they're demeaning to art and artists, vulgar, and mercenary; and they're so crowded that I feel herded like cattle. But there were a couple of fun (if not particularly good) huge group exhibitions timed to take advantage of all the people in town for the art fairs. The best was Spring/Break (unfortunately it ended March 9th).
By my count, Spring/Break had 39 different curators and about 150 artists. It took place in an old school on Prince and Mott that reminded me of the scruffy good old days of PS 1.
Sussman and Lee shot this video, somewhat reminiscent of Hitchcock's Rear Window, which captures a glimpse of people going about their everyday lives in an apartment building in Berlin. I found it strangely mesmerizing and at the same time uncomfortably voyeuristic.
I used to find Walter Robinson's paintings dry and illustrational. But over the years his drawing has become more economical, crisp and bold, his colors more sophisticated and interactive and glowing, and his paint handling more delicate and subtle. Robinson's subject is still pre-war pulpy eroticism, something he's been involved with since the seventies, but now the paintings are a visual delight.

Another enormous show was The Last Brucennial (through April 20th), a messy salon-style installation of almost 400 artists of widely varying quality. 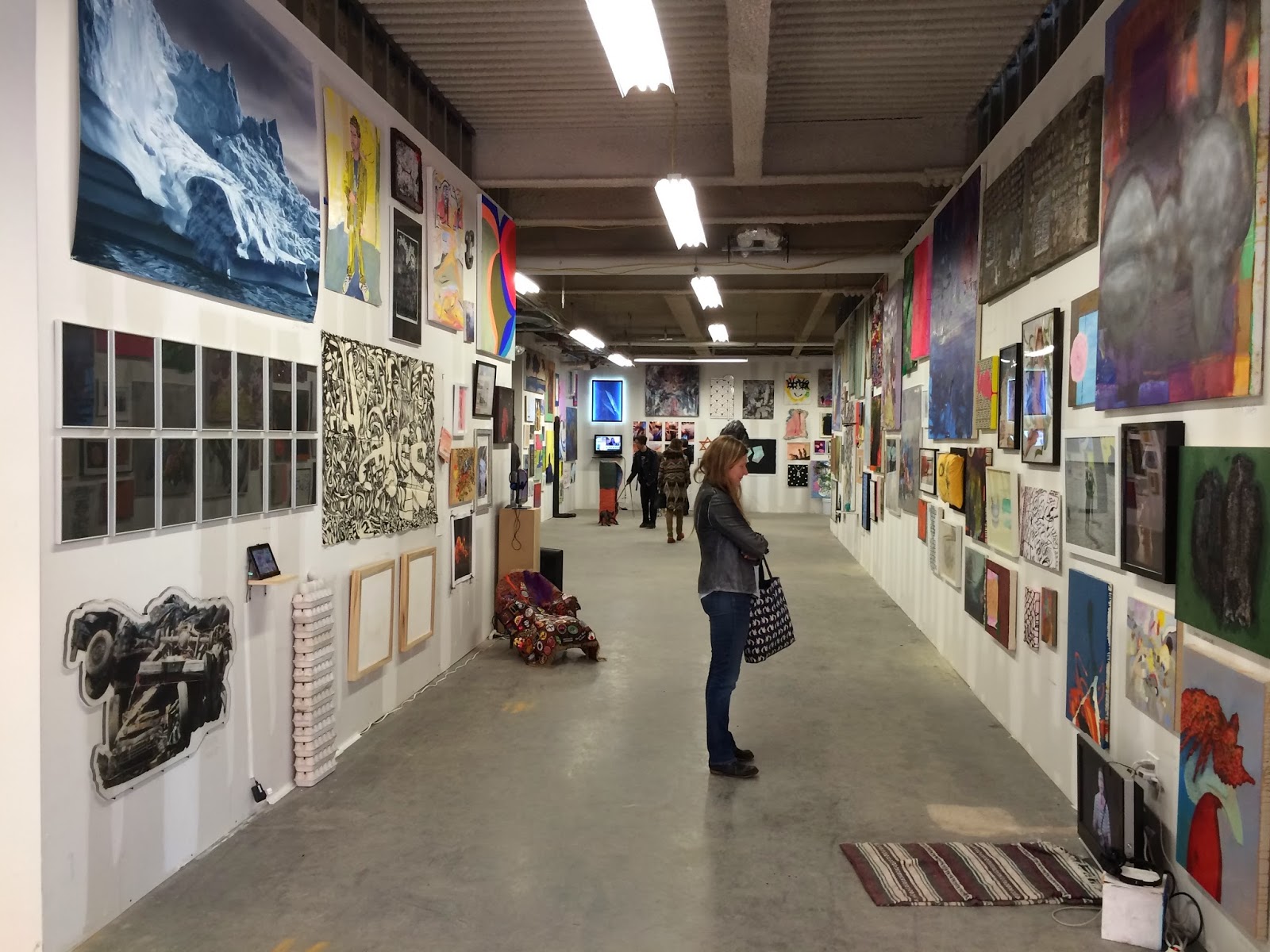 It's almost impossible for good work to look good in this environment. That's one of the reasons I hate art fairs. But at least this show doesn't have the vulgar commercialism and snobbery of an art fair; on the contrary, there's a democratic egalitarianism here that's definitely not about making money, and it's very refreshing.

And of course there's the Whitney Biennial 2014 (until May 25th). This time it was organized by three curators, each separately responsible for their own floor. Except for powerful videos by Lucien Castaing-Taylor and Véréna Paravel, I found this Biennial meh at best. Not bad, just not fresh or challenging. (See the Times review for some photos.)

I know I'm going through a period where I'm not inspired to write about the work I've been seeing, and it may be a general (I hope temporary) lack of enthusiasm. But I honestly felt that everything in this Biennial looked self-consciously hip and lacked any true authenticity or vision. What good art there was, such as paintings by Louise Fishman, Jacqueline Humphries, Dona Nelson and Amy Sillman, I've seen plenty of times before.

This is the last Biennial in this building. Next year the Whitney moves to a new building near the High Line in the Meatpacking District. Here's a rendering of what the new building, designed by Renzo Piano, will look like:

Posted by Charles Kessler at 2:14 PM

Nice read. Thanks for the art update. I didn't know about the Whitney move.

In full agreement with the major loss with Hudson's passing. He was such a generous person, and set such a great example of integrity and commitment to the arts.

Personally, I was mostly disappointed by the Spring Break art show. I did like Walter Robinson's paintings though.