By Charles Kessler
Aside from the hyped-up Edvard Munch: The Scream (until April 29th), the main attraction at the Museum of Modern Art now is Inventing Abstraction, 1910–1925 (until April 15th).

I remember seeing an exhibition at the Met a while back about the origins of photography (it may have been The Dawn of Photography, French Daguerreotypes, 1839–1855, but I'm not sure) and being amazed at how quickly the possibilities of the new medium were explored. I felt the same way at this MoMA exhibition. The show contains early very large paintings by Leger, Boccioni, Picabia, Kandinski, and this one by Morgan Russell:
And this:
There are early color paintings and even shaped paintings in the exhibition. This for example:
And of course minimalism:
Here's a thought: after the initial great leap, maybe it's not all that difficult to explore a new style or medium. Maybe the real difficulty, the real achievement, is to make profound meaning. Innovation is important only when it's used to that end. Just a thought.

The exhibition has justifiably received critical raves, but there have been two valid objections. Jerry Saltz wrote:


Only an institution this besotted with its own bellybutton would title a show “Inventing Abstraction, 1910–1925.” Abstraction wasn’t invented in the West in those years. Abstraction has been with us since the beginning.

Of course! There's aboriginal, prehistoric and iconoclastic art (art made by people who literally obey the commandment against making "graven images" — early Christian and Islamic art, for example) and most pottery, rugs, blankets and clothing — just to mention some of the abstract art that's been around for hundreds of years (thousands in the case of prehistoric art). And it makes sense that abstraction has been around for such a long time. Why make something that you can see everyday when you can make something altogether different —  something perhaps more magical or holy or decorative than everyday things.

Tyler Green forcefully pointed out that they omitted Matisse. Sure one can always come up with artists that should have been included in a show like this, but to leave out Matisse  — come on! I know Matisse never went completely abstract, but neither did Picasso, and they placed him in the first room (albeit with only two small paintings). Certainly Matisse was every bit as important as Picasso in the "invention of abstraction."

And I have my own quibble. While it was thrilling to see video of some avant-garde dances from this period, especially the visceral and intense  Hexentanz (Witch Dance) by Mary Wegman, I don’t understand what these particular dances have to do with "inventing abstraction." That they broke away from the traditional conventions of ballet doesn’t necessarily make their work abstract any more than Cezanne breaking from academic art made his paintings abstract. These dances were still narrative.

Finally, here are a few MoMA developments, of more or less interest, that have nothing to do with art: 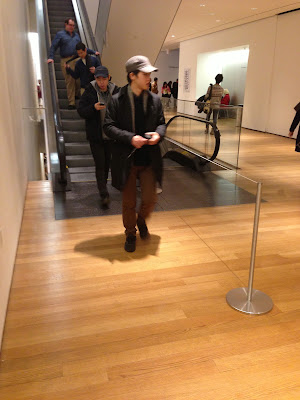 But there's still my other pet peeve — MoMA's obnoxious wall along 54th Street. 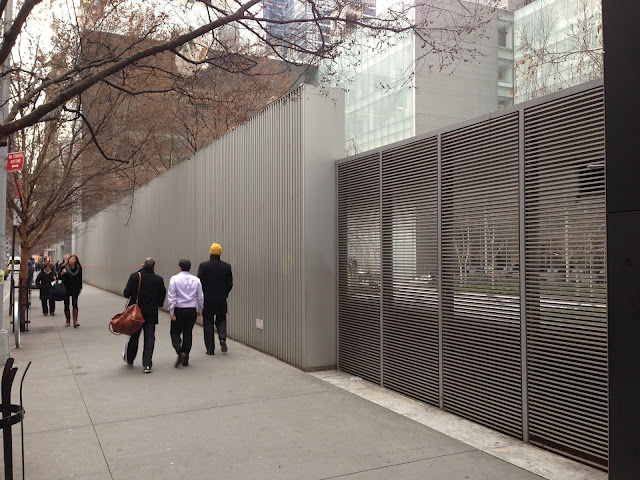 They obviously need something there for security, but part of the wall is screening (see photo above); why not all of it?  As far as I can tell, it's to shield the sculpture garden from pedestrians and traffic (eeeuw, city life — can't have that). As if the museum isn't already like a busy shopping mall anyway. In any case that's not reason enough to blight a city street. Be a little generous, MoMA — allow pedestrians to enjoy the sculpture garden as they walk by instead of insulting them with a blank wall. At least put some art on the damn thing, for God's sake.
Posted by Charles Kessler at 10:17 AM