The Art of the Americas Wing, Boston MFA

The Museum of Fine Arts (MFA) in Boston is one of the largest and best encyclopedic museums in the United States. Considering how great the collection is, and in spite of their best efforts (many free days, open until 9:45, free live music, knowledgeable and extremely helpful guards, one of whom walked me to a painting I asked about), their attendance isn't all that good. The MFA attendance for last year was 911,216 — way down the list in 54th place, less than half that of San Francisco’s M. H. de Young Museum, which isn’t nearly as important.
The museum’s original 1909 building was designed by the architect Guy Lowel in the neoclassical style. Typical of its day, it was, and still is, a dark and uninviting place. Maybe that’s a reason why the museum isn’t as popular as its collection warrants.

In 1981 the MFA tried to fix the uninviting design.
They changed the entrance and opened a large new space designed by I. M. Pei to house the museum's contemporary art collection, as well as a cafe, restaurant, gift shop and a space for temporary exhibitions. This space went to the other extreme — it's too bright and busy-feeling, even when it's empty. (I don't know why, but it seems most museums' contemporary spaces are that way — probably to show they're a groovy and happening place.)

On November 20, 2010, after five years and $504 million, the MFA opened a 121,307-square-foot, four-level new wing for the Art of the Americas. This time they finally got it completely right — at least they got the exhibition galleries right. The entry-courtyard to the new wing (below), however, is an overly grand 12,184-square-foot, 63-foot-high glass-enclosed courtyard (about equal to the space for exhibitions) with a restaurant that's dwarfed by the space, and no art except for a large, green Gilhouly sculpture.
(Why do museums feel they need these kinds of soaring, extravagant spaces? Are they imitating the Guggenheim? Is it for patron events?)

While I think the courtyard is ridiculous, the exhibition area of the new Americas Wing can’t be better. In fact, it’s kind of a relief to get away from the courtyard and enter this quiet, intimately proportioned, well-lit space. Each floor has a central spine, with rows of galleries (53 in all) on either side, which makes it easy to locate where you are, and also allows for a great variety of displays.
There’s some criticism that the space isn’t architecturally interesting enough, that there are no surprises or risks taken. Well that’s fine with me — I think "great" (i.e., showy) architecture, at least when it comes to the interior, is a distraction that usually overpowers the art. Visual variety can come from the art installations, and the MFA does an excellent job in that respect.
Unlike Renzo Piano’s addition to the Gardner, the London architectural firm of Foster and Partners designed a truly restrained, perfect space to exhibit a wide variety of art.
This new wing is unique in that it houses the art of the Americas (plural); it's not an American wing like the Met's new galleries. The installations ascend chronologically with Pre-Columbian on the bottom (the basement actually, although it doesn’t feel like it ) and 20th-century American on top, with Native North American, African-American, and what we usually think of as American Art (the colonial portraiture of John Singleton Copley and Gilbert Stuart, the silverware of Paul Revere, the Hudson River School of landscape painting, etc.) in between.
The teapot Paul Revere is holding and the two large Japanese vases depicted above are on display next to their respective paintings. Talk about the strength of the collection!

Instead of period rooms which mostly waste space, there are periods walls:
Their collection of Pre-Columbian art is superb -- who would have guessed?

The weakest floor is the contemporary art. 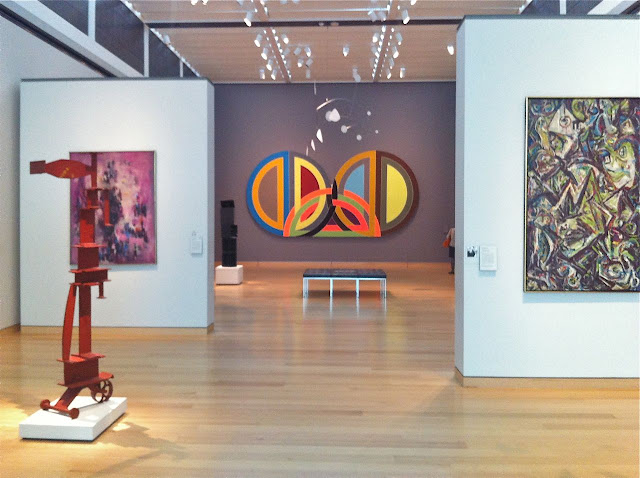 I don’t agree with the premise of an Art of the Americas Wing. I think it's an arbitrary distinction. Why not have a wing for all French art from the Lascaux caves to the present? Or just art from 1900 to 2000? (Not a bad idea actually!) What does Pre-Columbian, Native American or South American art have to do with each other or with Colonial American art or the Hudson River School or any of the work usually called American art? None of these are detectable in Sargent's The Daughters of Edward Darley Boit, for example, but the influences of Degas and Velazquez's Las Meninas are — influences Sargent himself acknowledges.

Even though American artists prior to the 20th century had a conflict between their democratic ideals and the Old World royal and religious art they thought was decadent, they nevertheless admired and learned from that art, and adopted it as their own. In fact there really wasn’t an American School in the way there was an Italian, French, Dutch or English School until Abstract Expressionism in the 1940's and 1950's. (Ironically, many of the Abstract Expressionists were influenced — or so they claimed — by Native American art.) Except perhaps for 19th-century landscape painting, American art was provincial and consisted mostly of moralizing allegories, pompous historical subjects or the soft porn of idealized nudes — all with an emphasis on showy virtuosity. American art needs to be seen in the context of the European art from which it derives.

The MFA finally got the space right with this new addition, but they got the curatorial concept wrong.
Posted by Charles Kessler at 5:46 PM